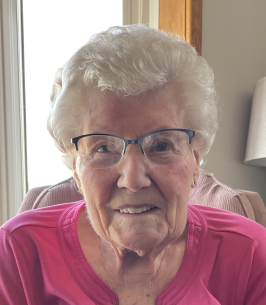 Beth Alixe Adele Ryles, “Alixe”, passed away suddenly on Wednesday, May 4, 2022 at the home of her daughter in Redvers, Saskatchewan with family at her side.

Mom was born in Odanah County, Manitoba, the second daughter of the late Harry Frederick and Janey Evans Meadows. She was raised on the farm prior to attending Brandon College, where she graduated in 1942 with her BA. Mom was honoured to represent her class as Lady Stick. She served as a member of the Canadian Women’s Army Corps as a Lieutenant during WWII and after her discharge she obtained a Bachelor of Social Work Degree from the University of Toronto. After which, Mom moved back to Brandon, married Thomas Ryles and together they raised a family of three daughters. She re-entered the work force in the early 1960’s, working in Social Services for the Manitoba Government as Director of various programs.

Throughout her life Mom was devoted to helping others and was generous and encouraging with her talents, time and monies, assisting many individuals on their journey through their education and life. Our friends were always welcome in our home. Mom and Dad moved to Winnipeg in the early 1970’s and Mom officially retired in 1983. She returned to Brandon in 2007 to be closer to family and lived in Brandon until her passing. She was a life member of the Eastern Star, a member for 64 years.

A private family memorial will be held at a later date.

In lieu of flowers, donations in memory of Alixe may be made to the Alison Ryles Memorial Suzuki String Award at BU, and directed to Brandon University Foundation by mail at 270 18th Street, Brandon, MB, R7A 6A9, online at BrandonU.ca/Give, or by phone to 204-727-7374 or a charity of your choice.