To share your memory on the wall of Della Radcliffe, sign in using one of the following options:

Della Dawn was born on January 29, 1940, in Shoal Lake, MB, the only child of Bill and Ruth (nee Parker) May. She was raised on the farm outside Strathclair, MB, was very active in 4-H and was strongly encouraged to attend university by her parents. She graduated from the University of Manitoba in 1962 with a degree in Home Economics. I believe this was one of her accomplishments of which she was most proud, as her ties to the Canadian Home Economics Association were so very important to her throughout her life. Her degree opened many doors for her and was the basis of so much of the work she did throughout her lifetime.

Della married Robert Radcliffe on October 12, 1963, and they had two daughters: Bonnie and Tracy. They lived on the farm near Cardale, MB until Robert’s death in 2017, when she moved to Brandon to Victoria Landing. The years in between were spent being many things in addition to a farm wife (she much preferred driving the grain truck to housework and gardening) and mother. Della worked as a Home Economist in Minnedosa for several years. She was a teacher - she taught 4-H, Home-Economics in Rivers, and hundreds of sewing and quilting courses. She was a writer –she was likely best known for her long-running column in Grainews and articles in Farm Woman Magazine, but she also wrote and presented many speeches for various meetings and organizations. She was a judge at fairs all over Manitoba, judging foods and sewing.

Della loved so many things – to sew and quilt, to cook and bake (you would never taste better pie crust), she loved to write, to read, to sing in the church choir and to travel – she went all over the world – England, Scotland, Ireland, Africa, India, China, Thailand, Australia, adventures that fed her soul. She loved to laugh – her smile was infectious and unforgettable, and she loved people – she loved her husband, her children and grandchildren, her friends and relatives, living and deceased; she loved and missed her parents and aunts and uncles terribly. She loved and charmed the nurses and aides in the hospital, who were so very caring during her last days. She loved animals – her cats – she always had one in her house, her silly Jack Russell terrier, Honda, and her grand-dogs.

Maybe my favorite thing about her was how she encouraged other women to be all they could be. She was an active member in the Women’s Institute for decades, an organization that seeks to empower women in order to strengthen families and communities. She believed that one woman’s success helped other women succeed, that when women helped other women, they helped themselves as well. She was the first feminist I knew, and in many ways the one I most admired.

Donations in memory of Della may be made to the Canadian Home Economics Foundation, P.O. Box 2582 Stn Main, Winnipeg, MB R3C 4B3, chef-fcef.ca.

There is in all this cold and hollow world
No fount of deep, strong, deathless love;
Save that within a mother’s heart.
-Felicia Hemans
Read Less

Print
The family will cherish her memory privately.

Consider providing a gift of comfort for the family of Della Radcliffe by sending flowers.

We encourage you to share your most beloved memories of Della here, so that the family and other loved ones can always see it. You can upload cherished photographs, or share your favorite stories, and can even comment on those shared by others.

Posted May 15, 2021 at 07:27pm
Dear Tracy and Mark. I just read that your mom has passed away. I'm so sorry for your loss.
With deep sympathy, Kathie.
Comment Share
Share via:
KH

Posted Apr 27, 2021 at 03:44pm
Our sincere sympathy to Bonnie,Tracy and all of Della’s friends and family. Hold the good memories close!
Comment Share
Share via:
LF

Posted Apr 27, 2021 at 01:16pm
We would like to extend our sincere condolences to Tracy, Bonnie and all Of Della's family. We are very sorry for your loss.
Mark and Lynn Fortune
Comment Share
Share via:
VB

Posted Apr 26, 2021 at 07:43pm
To the Redcliffe Family Sorry to hear of Della's passing . Sincere sympathy from Verna(Yorke) and Harvey Brown Strathclair
Comment Share
Share via: 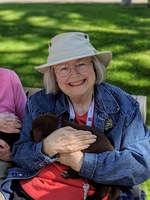 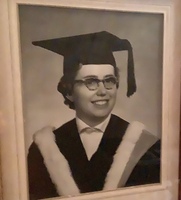