To share your memory on the wall of \"Jim\" Elliott Ward, sign in using one of the following options:

“No longer by my side,
but forever in my heart.”
-unknown
Read Less

Consider providing a gift of comfort for the family of "Jim" Elliott Ward by sending flowers.

We encourage you to share your most beloved memories of "Jim" Elliott here, so that the family and other loved ones can always see it. You can upload cherished photographs, or share your favorite stories, and can even comment on those shared by others.

Posted Apr 15, 2021 at 03:35pm
Our deepest and most sincere condolences to you, Dianne! Jim was always there with a helping hand for the people moving in to Monterey...he always seemed to enjoy his work. May he Rest In Peace...Don & Louise Edwards

Posted Apr 12, 2021 at 08:48pm
My thoughts and prayers are with you Diane as you go through this very difficult time. Cherish all your memories.
Comment Share
Share via:
VC

Posted Apr 12, 2021 at 08:25pm
So sorry Diane. Always enjoyed your company. Jim was so kind and accommodating when we moved onto Goldfinch; always enjoyed Jim’s ‘gruff’ demeanour. 🌹
Comment Share
Share via:
KM

Posted Apr 10, 2021 at 06:20pm
Please accept my condolences Diane. Jim was a wonderful person and you shared many special memories together.
Comment Share
Share via:
E

Posted Apr 09, 2021 at 01:00pm
Diane I am so sorry to hear about Jim ! I loved that grumpy guy and my my heart breaks for you ! I am thinking of you and sending you love and strength !
Comment Share
Share via: 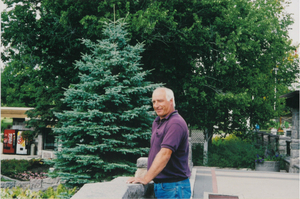