To share your memory on the wall of John Hiebert, sign in using one of the following options:

Donations are being accepted for: THE GIDEONS INTERNATIONAL IN CANADA.

Consider providing a gift of comfort for the family of John Hiebert by sending flowers.

Jim - your dad was always so proud of you and your family and your accomplishments. When you married Bernice he was so happy for you and so excited to have grand children and we heard a lot about them when we saw your dad & mom. Later when the boys came along he was excited to talk about them and the events they were involved in. My mom would often tell me what your kids were up to after talking to your parents on the phone or in person. He was a proud farmer and loved his Simmental cattle and John Deere equipment He would also tease Wilma about giving out loans in low German cause of where she works. 😆 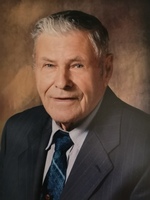