To share your memory on the wall of John Wolfe, sign in using one of the following options:

Print
The family will cherish his memory privately.

Consider providing a gift of comfort for the family of John Wolfe by sending flowers.

Posted Jun 06, 2021 at 11:00am
We were saddened to hear of John’s passing and want you to know our thoughts and prayers are with you.
No matter how old we are, it’s never easy to lose a parent.
With fond memories, Barb & Bill Sutherland

Posted Jun 04, 2021 at 09:46pm
So very sorry to hear about John, I believe he will be very happy to be with Phyllis again.
We will have lots of happy memories him and his smiling face!! Take care Anita Pearce

We had the privilege of spending time at Aunt Jessie’s and Uncle Dave’s when we were children. My memories are many and happy ones. Playing on the hat bales and Johnny skirting milk at us while milking the cowes. When Johnny boarded at our home in Brooklands he entertained us by flexing his arm muscles much to our amusement. He always had a smile and loved to laugh. We, Garnet and myself lived in Basswood and would go and visit Johnny and Phyllis from time to time and always felt welcome. Several years ago I owned a VW and needed some work done on my car in Winnipeg. The courtesy car driver asked if I felt comfortable if he picked up another driver. I said sure. The driver was Johnny. We just chatted during the short drive trying to fit in lots of conversation before he was dropped off. I have so many fond memories and will treasure them forever. To the family left behind, dwell on the happy memories he left you. I know I will. Gloria Lee (Enns) 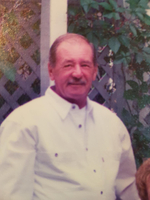