To share your memory on the wall of Maurice \"Mo\" Karrouze, sign in using one of the following options:

Print
Maurice Lionel Karrouze – Mo – passed away, at peace, as the sun set on Friday, September 4, 2020 after a long and valiant battle with cancer. He was at home, surrounded with the love, laughter and warmth of his beloved family.

Mo w... Read More
Maurice Lionel Karrouze – Mo – passed away, at peace, as the sun set on Friday, September 4, 2020 after a long and valiant battle with cancer. He was at home, surrounded with the love, laughter and warmth of his beloved family.

Mo was born on August 30, 1950 in Brighton, East Sussex, England. He was the son of a Lebanese man who had served as an officer in Charles de Gaulle’s army and fought for the Resistance, and an English gypsy woman whose family of performers was known as the Travelling Moons. Mo attended St. Luke’s School, where he was a member of the boxing team, went on to attend school in Woodingdean, then to the Royal Navy training ship Arethusa. Called to pursue life as an artist and musician, he moved to London to attend the London College of Fashion. Following his apprenticeship as a hairstylist, he secured a coveted position with Vidal Sassoon at his Bond Street salon. Mo’s passion for the arts was expressed in his songwriting, composing and arranging. He formed and led a number of bands, notably “Going Straight” in the U.K., the “League of Nations” in South Africa, and “Global Village Trucking Company” here in Brandon. Mo formed enduring friendships with his bandmates and toured widely in Europe, the U.S., Canada and South Africa; his songs will keep his voice alive forever.

Always possessing a profound social conscience, Mo’s politically charged lyrics and his work with the African National Congress during the Apartheid era in South Africa resulted in his arrest and ultimate exile from that country. Arriving in North America, Mo worked tirelessly to reunite his non-white band mates, finally succeeding in Toronto. One of his proudest moments was performing for and having breakfast with Nelson Mandela when he travelled to Toronto shortly after his release from prison in South Africa. Mo has continued to live a life lived for others, for justice and equality and equity for all. He has cared passionately for those whose voices were unheard or silenced. He has gently assisted those most in need of care, so quietly that in giving with “his right hand, his left hand did not know.”

Since settling in Brandon, Mo has been an active community member, serving on the Brandon Catholic School Board, St. Augustine’s Parish Council, the Stewardship Committee, the board of Helping Hands, the Westman Multicultural Festival Committee, and the Knights of Columbus. He has also taken joy in serving in music ministry at St. Augustine Church.

In addition to establishing and growing a successful family business, Mo has been an involved participant in Brandon’s music scene. The last decade has seen him form a popular tribute band, “The Beetles.” He has taken such delight in those sweet harmonies and in filling the dance floor with people enjoying themselves.

Passionate about his art, his music, politics and social justice, Mo’s heartbeat has been for his family. He loved his family with unparalleled depth. He inspired us with his faith, positivity, his great grace and dignity as he fought so fiercely to stay with us. Mo is survived by his wife and best friend of 33 years, Heather, his daughters Meaghan (Trevor), Jenna (Jaxon), Amie and Emily, as well as his much adored grandsons: Julian, Jaxon, Jonah and Joseph. Mo’s family in the U.K and Middle East: sons Mark and Andrew, brothers Danny, Zak and Adam, sisters Kim and Sharon, grandchildren Anna, Rosie, Molly and Bailey, as well as nieces, nephews and cousins also mourn his passing.

A Funeral Mass was attended by Mo’s immediate family on Monday, September 14, 2020 at St. Augustine Church. Thank you to Father John and to Father Leo for their words of comfort and to Melissa Anaetoh for the beautiful music. Sincere thanks to the many medical professionals who have helped Mo to enjoy life despite his illness; thanks to Cancer Care Manitoba and to the Western Manitoba Cancer Centre. Much gratitude to Memories Chapel for their gentle and compassionate care of us in our grief. To the many, many friends and family members who have walked this journey with us, your love, support and prayers have lifted us and given us strength – it has meant the world to us.

Donations in memory of Mo may be made to Helping Hands, 111-7th Street, Brandon, Manitoba, R7A 3S5. A public celebration of Mo’s life will be held to raise funds for Cancer Care Manitoba when we may safely gather in large numbers.

“The song has ended, but the melody remains.”
Read Less

Print
Due to Covid Restrictions, Mo’s family will cherish his memory privately.

Consider providing a gift of comfort for the family of Maurice "Mo" Karrouze by sending flowers.

We encourage you to share your most beloved memories of Maurice "Mo" here, so that the family and other loved ones can always see it. You can upload cherished photographs, or share your favorite stories, and can even comment on those shared by others.

Posted Oct 02, 2020 at 01:00pm
We are so sad to hear of Mo’s passing. We give thanks for the memories he left us. Mo had the gift or making you feel like you were his best friend every time he greeted you. Whether we walked with Mo a short or long time, we hold inside of us a small share of his energy, his love of life and his caring. Thank you Mo. What a wonderful legacy! May your family have peace in their memories of your love.
David and Diane Thorpe
Comment Share
Share via:
F

Posted Sep 28, 2020 at 02:15am
Heather, Meaghan, Amie, Jenna, & Emily my heart goes out to you and your family during this difficult time. It was heartbreaking to hear of Mo’s passing.

The first day I walked into Mo’s Salon, I met this larger than life character who was so genuine and welcoming. When I walked out of there, I was rejuvenated and my hair
looked like a fine piece of art! The man was a true artist! I was hooked and the rest is history. Going to Hairistocracy was like going to an amusing joyful reunion and I will cherish every memory. Mo’s stories were beyond interesting and I am grateful that, over the years, he shared so many of them. There was no doubt, however, that the biggest and most important story , of his life, was his family!
Mo, I saw you as a strong, spirited, witty, intelligent man who lived life to the fullest and I will never forget you my friend!
( keep playing your drums and sing with the Angels)
Nina Patey
Comment Share
Share via:
RB

Posted Sep 24, 2020 at 01:25pm
Our heartfelt condolences Heather, Meaghan, Amie, Jenna, Emily and your families.
You have been in our many thoughts and prayers. Mo will always be remembered with affection.
Our love to each of you, Rudy & Rosemarie
Comment Share
Share via:
SM

Posted Sep 21, 2020 at 09:54am
I will always remember Mo playing music with the Beetles and obviously showing his ultimate passion for music.. My heartfelt sympathies to Heather and your girls and family. This is a difficult time and I wish lots of family time and memories will help. Please take care of yourself and each other. Susan and Will Majcher
Comment Share
Share via:
CS

Posted Sep 17, 2020 at 06:47pm
Mo’s jokes, when sitting in his chair, made me cry with laughter too many times. I thought the world of him as a friend to me, Craig and my kids, Jess, Katy and Patrick. He was kind, creative, funny, thoughtful, bold, brave, talented, gracious, spirited, giving and on and on. Along with Heather, the love of his life, he touched so many of us and supported us in times of need. His community was huge and embraced us all. His ability to make you feel special no matter how busy he was or what he was going through was his super power..… My heart goes out to Heather, Meaghan, Aimie, Jenna and Emily and their families. Your husband and father was a one in a million and his spirit lives on in all of you. With much love from Caroline, Jess, Katy and Patrick Slimmon
Comment Share
Share via: 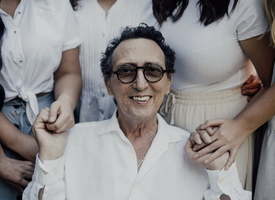