To share your memory on the wall of Mel Cable, sign in using one of the following options:

Donations are being accepted for: BRANDON SOCIETY FOR THE PREVENTION OF CRUELTY TO ANIMALS.

Consider providing a gift of comfort for the family of Mel Cable by sending flowers.

We encourage you to share your most beloved memories of Mel here, so that the family and other loved ones can always see it. You can upload cherished photographs, or share your favorite stories, and can even comment on those shared by others.

Posted Mar 14, 2021 at 04:22pm
Sending our heartfelt condolences to the Mcnutt and Wilson families on the loss of their dear father and grandfather Mel. May he Rest In Peace and may the family be blessed with many happy memories. Our thoughts are with you.
Kevin and Susan Arran
Comment Share
Share via:
SM

Posted Mar 14, 2021 at 02:57pm
My condolences to the McNuttt and Wilson families on the loss of your dad and grandpa. Mel seemed liked a very interesting person with lots of spirit and enthusiasm. I recognized your names in the paper and it took me back down memory lane from Green Acres days. I just want to wish your families well. Take care of each other. All the best, Mrs. M. (Susan Majcher)
Comment Share
Share via:
DP

Posted Mar 13, 2021 at 09:34am
Condolences to the family, he will be missed. Enjoyed having Mel and Betty as neighbours for many years. Very kind people.
Denis and Diane Potvin
Comment Share
Share via: 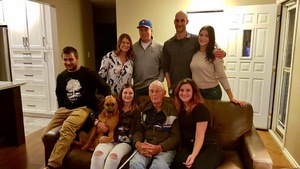