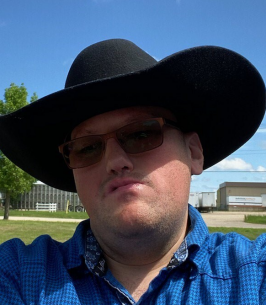 LEE: Michael James, age 32 years, passed away on Tuesday, August 2, 2022 in Brandon, Manitoba. Michael is survived by his mother Cheryl Chambers (Jamie Carey) and father David (Nicole) Lee. A private family graveside service will be held at the Brandon Cemetery with a Celebration of Life to be held at a later date. Donation in memory of Michael may be made to the Special Olympics Westman, Box 20149, Brandon, MB R7A 6Y8. Complete obituary information and service details will follow.

It is with heavy hearts that we announce the sudden passing of our beloved son, grandson, nephew, cousin, and friend Michael James Lee on August 2, 2022.

Michael leaped into our hearts on May 5, 1990, at Brandon General Hospital. He engaged us all in many journeys from the first day. Mike embraced life and every situation with his unique optimism and enthusiastic declaration “This is my best day ever!”. Mike would jump into any activities that his beloved grandparents were doing. Helping “Gramps” with his projects in the yard or setting up the camper every season were some of his favorite activities.

Mike enjoyed the many teams and sports he engaged in through Special Olympics in Westman. This group has played a special role in Mike’s life. It has taken him across the province and to compete in the National Special Olympic Bowling Championships in Eastern Canada, where he received a bronze and silver medal. Mike graduated from Neelin High School in 2011 and after a few enjoyable work placements he became a part of the COR team where he has worked and made many friends.

Michael used his engaging personality and exceptional memory to develop deep connections to the people he met. He was never afraid to introduce himself or have a chat with a friend or acquaintance. Michael’s interest in the Royal Manitoba Winter Fair led him to develop a strong relationship with the team at Cowtown in Brandon who embraced Mike and invited him to work at their display booth at the fair and enthusiastically greet everyone who came by.

We will all miss Mike’s optimism, enthusiasm, and easy friendship. To honour him we should all strive to embrace each day as “the best day ever!”.

On Tuesday, August 2, 2022 we had to say goodbye to our son, grandson, nephew and cousin, Michael James Lee, age 32 years. Mike was born May 5, 1990 to David and Cheryl, and in his short life, he faced many challenges and never complained. He also achieved many successes. As a gifted athlete, Mike succeeded in a variety of Special Olympics sports. Mike attended J.R. Reid School; Riverheights School, where he was part of the ribbon cutting ceremony for the Grand Opening of the new Life Skills Suite in 2004; and Ecole Secondaire Neelin High School, graduating in 2011. Mike is survived by his parents David and Cheryl; Auntie Lorraine Carson (Dave Baskerville) and her sons Richard Morgan, Jeffery Desender and their families; Auntie Karen (Tim Leibrecht) and her family A.J Wells and Makeena Leibrecht; Aunt Kathy’s daughters Sheena and Chelsea Fisher and family; Auntie Evelyn (Peter Gauthier) and her daughter Brooklyn Gauthier; stepdad Jamie Carey; Grandma Bonnie Carey; Marilyn Flieger (Dan Piekema); Beverly (Brad Baraniuk) and their daughter Stephanie. Mike was predeceased by Papa Arvid Wells in 2000; G.G. Barbara Wells in 2001 and Auntie Kathy Fisher in 2015. Our families would like to express our heartfelt gratitude for all the sympathy and support we have received. Your kind gestures have meant the world to us during this difficult time. In lieu of flowers, donations in memory of Mike may be made to Special Olympics Westman, Box 20149, Brandon, MB R7A 6Y8. Michael will be laid to rest in a private graveside service at the Brandon Cemetery.

You may be gone but you will never be forgotten. Rest in Peace, Mikey.