To share your memory on the wall of Torrence \"Buck\" Byers, sign in using one of the following options:

He was raised in the McAuley, Manitoba area. In 1957, he married Elizabeth (Swan); they had 6 children. In 1973, they sold the McAuley farm and moved to Brandon. After the move to Brandon, Buck and Elizabeth went their separate ways. Buck then met Lois (Leslie) and they moved to Red Deer, Alberta. Buck experienced many different careers in his lifetime which included farming in St. Lazare and McAuley areas, CN Rail, the Highways dept, and when he moved to Red Deer, Alberta, in 1980, he worked for the City of Red Deer maintenance department until his retirement. Shortly after retirement, he and Lois moved back to Manitoba. Here in Brandon, Buck and two of his sons, developed a business hauling water, to begin with, and then it progressed into a snow removal business called TGV Hauling (their initials). The business sold all the equipment a few years later, and this is when he fully retired. During his life span, Buck enjoyed many different activities with family and friends such as bowling, playing cards, baking, carpentry, and watching the Blue Jays. As he aged, arthritis was slowing him down, but he had his scooter which took him to all parts of Brandon where he still could visit with anyone he came across.

Buck leaves to mourn his children; Claudette (Emery) Stonehouse of Winnipeg, Gordon, Vernon (Sharla), Brian all of Brandon, and Michelle (Stan) Timmerman of Leduc, along with 22 grandchildren and 25 great-grandchildren. He also leaves to mourn Lois’ children; Linda (Bob) Thompson, Terry (Angela) Leslie, and Danny (Debbie) Leslie, and their children and grandchildren. Buck is also survived by his sisters Ethel (Rookes) of Virden, and Margaret (Wedgewood) of Brandon. He was predeceased by his daughter Vivian Joy, siblings Florence Reta, Lawrence Thomas, Gordon Howard, John Elliot, Robert Henry, Verna May, William James, and two unnamed children, as well as his partner Lois Leslie.

A private family committal took place at the Brandon Cemetery on Wednesday, September 23, 2020, with Stan Timmerman officiating. His urn was placed in the columbarium alongside Lois where he wanted to spend eternal life. Urn bearers were Corporal Zachary Stonehouse (grandchild) and Cadet Nicholas Stonehouse (great-grandchild).
Read Less

Consider providing a gift of comfort for the family of Torrence "Buck" Byers by sending flowers.

We encourage you to share your most beloved memories of Torrence "Buck" here, so that the family and other loved ones can always see it. You can upload cherished photographs, or share your favorite stories, and can even comment on those shared by others. 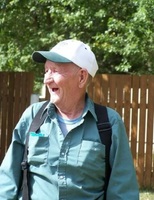