To share your memory on the wall of Wilfred Dilay, sign in using one of the following options:

Consider providing a gift of comfort for the family of Wilfred Dilay by sending flowers.

We encourage you to share your most beloved memories of Wilfred here, so that the family and other loved ones can always see it. You can upload cherished photographs, or share your favorite stories, and can even comment on those shared by others.

Posted Apr 10, 2021 at 10:13am
Lisa, Leanne and Dustin. So Sorry to hear of the loss of your dad. My condolences to you and your families.
Comment Share
Share via:
AG

Posted Apr 05, 2021 at 05:20pm
Lisa, Leanne & Dustin- Sorry for the loss of your Dad. Our prayers and thoughts are with you at his difficult time. Ann & Gerald Barnes
Comment Share
Share via:
EM

Posted Apr 01, 2021 at 04:07pm
Dear Lisa, Leanne & Dustin,
My deepest condolences on the loss of your father.
Wilf was my quiet, kind and gentle-natured cousin. I have many memories of our childhood growing up together in The Pas. We always celebrated Christmas together...Mom & Aunt Helen would prepare wonderful Ukrainian dishes. As kids, every summer we'd board the train and travel to Garland to visit with our grandparents. Those were such fun times with Don, Wilf and Gary. In later years, I moved west and lost touch with Wilf, but Aunt Helen kept me informed of your family on my annual visits to Dauphin. She'd proudly show me your photos and speak of your dad. Now, he can rest in peace, free of pain. He will always be remembered.
Betsy May Calgary, AB
Comment Share
Share via:
L

Posted Apr 01, 2021 at 02:58pm
To Wilf's family:
I have many memories of Wilf, my cousin. We grew up together in The Pas and many good times were shared with Don, Wilf & Gary. He was always so studious, friendly and caring. I also had the good fortune of seeing him often while he was a patient at the Health Sciences Centre 40-45 years ago as I worked there and would visit with him often. He was often in pain, but never complained and always seemed more interested in my life than speaking of his many health troubles. I remember fondly of him meeting Maxine, which brought much joy to his life, and I was able to be at their wedding. After Wilf moved to Brandon I did not see him often, but do remember going to his house in Brandon when his children were young, and visiting with him a few times in The Pas when he and his family were traveling to Flin Flon. The visits with Wilf were always so enjoyable and I regret that I lost touch with him in later years, but have many wonderful memories of our times together. May he rest in peace now, free from pain, but knowing that he will be missed.
Lorraine Soshycki (cousin)
Comment Share
Share via:

Posted Apr 01, 2021 at 12:00pm
I was saddened to hear about Wilf’s passing. I will always remember him for his kind heart and gentle nature. My thoughts and prayers are with you at this difficult time. 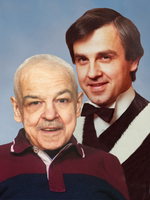