To share your memory on the wall of Louise Bond, sign in using one of the following options:

Donations are being accepted for: SPECIAL OLYMPICS MANITOBA, INC..

Consider providing a gift of comfort for the family of Louise Bond by sending flowers.

We encourage you to share your most beloved memories of Louise here, so that the family and other loved ones can always see it. You can upload cherished photographs, or share your favorite stories, and can even comment on those shared by others.

Posted Mar 13, 2021 at 11:49am
Heather and family
Our sympathy to you in the loss of your Mom. She was a grand lady in my mind, kind, compassionate, down-to-earth and always with a quick wit and sense of humour. She lived out a beautiful life and left many treasured memories.
With sincere sympathy,
Floyd and Phyllis Miller
Comment Share
Share via:
LD

Posted Mar 12, 2021 at 08:23pm
Heather, Garnet and Ed, I am sorry to hear of your mom's passing. I remember so many great times when I came to visit and play at your home. your mom always made me feel so welcome. Lynda (Carter) Denbow
Comment Share
Share via:
LJ

Posted Mar 11, 2021 at 04:21pm
Hello to dear Louise’s family,
I had the honor and pleasure of caring for Louise at Sokol Supportive from the time she arrived until February of 2019. As the activity coordinator as well as support worker, I got to know Louise well and enjoyed her sense of humor, spirit, and her kindness. She was always game for our parties and celebrations. I was amazed at her strength during the passing of her son, Jack, who we had gotten to know during his regular visits with Louise. After I left Sokol, Louise continued to keep in touch as did I. I will greatly miss this lovely lady and her laughter but I know Louise will be laughing all the more in heaven with her dear husband, Jackie and her great grandson ♥️. I only hope to have the same grace, strength, and youthful manner that Louise demonstrated daily. She will certainly be missed by the other ladies of Sokol especially Beth with whom she became fast friends. My thought and prayers are with you her family.

Posted Mar 10, 2021 at 11:27am
So sorry to hear of Louise's passing. I remember your Mom & Dad from the Old Time Dances that they used to attend. My Mom & Dad (Louise & Charlie Milne) were also avid dancers!!! I still remember the gift they gave us when we got married 30+ years ago! Again sincere condolences to all the Bond Families.
Comment Share
Share via:
SK

Posted Mar 10, 2021 at 10:29am
Louise will always hold a special place in my heart. Throughout the many years of doing her hair, I will cherish all our laughs and visits as I have learned so much from being with her.
Comment Share
Share via: 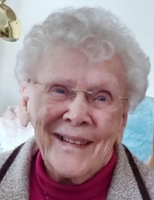