To share your memory on the wall of Ruby Simpson, sign in using one of the following options:

When I’m Gone
When I come to the end of my journey
And I travel my last weary mile,
Just forget if you can, that I ever frowned
And only remember the smile.
Forget unkind words I have spoken;
Remember some good I have done.
Forget that I ever had heartache
And remember I've had loads of fun.
Forget that I've stumbled and blundered
And sometimes fell by the way.
Remember I have fought some hard battles
And won, ere the close of the day.
Then forget to grieve for my going,
I would not have you sad for a day,
But in summer just gather some flowers
And remember the place where I lay,
And come in the shade of evening
When the sun paints the sky in the west.
Stand for a few moments beside me
And remember only my best.
Read Less

Consider providing a gift of comfort for the family of Ruby Simpson by sending flowers.

We encourage you to share your most beloved memories of Ruby here, so that the family and other loved ones can always see it. You can upload cherished photographs, or share your favorite stories, and can even comment on those shared by others.

Posted Apr 24, 2021 at 02:48pm
Dear Charlie and family, Sincere condolences. Both Grant and I enjoyed many laughs and good times with Ruby as we worked together on the MAA board. Ruby was a great problem solver and gave her all to every task. I know you will cherish her memory.
Carol Wilson
Comment Share
Share via:
LJ

Posted Apr 24, 2021 at 01:04am
Charlie and family, I am very sorry for your loss and I hope your memories will comfort you during this sad time.
Comment Share
Share via:
LM

Posted Apr 22, 2021 at 12:08pm
Charlie and Family
Our condolences to the family on the loss of of a wonderful lady. Ruby and I spent many years on the Manitoba Angus Board and I always enjoyed her organization and great ideas. We had many good chuckles with Ruby 's great sense of humor. This lady spent many hours at Tag-A-Long Red Angus and the Manitoba Angus which we all will remember her dedication. We will deeply miss her . Lois and Blair McRae
Comment Share
Share via:
TP

Posted Apr 18, 2021 at 10:34am
I’m so sorry to hear of Ruby’s passing . I will miss our Friday morning visit. I always enjoyed our chats. She will
be missed by many . Thinking of you all . Teresa Porter
Comment Share
Share via:
K 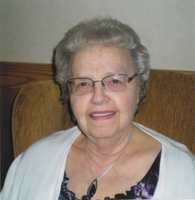